The Archtop Guitar and its specifications

The Archtop guitar is at a crossroad between acoustic guitars, folk and classical. From the english Arched, meaning curve and Top, refering to the harmonic table, the Archtop guitar is a rather singular piece of guitar making. Quite hidden from the common guitarist world..

Technical specifications of an Archtop Guitar

Created in 1905 by the famous master luthier Orville Gibson, founder of the mythical guitar brand, the Archtop guitar is inspired by quartet instruments, such as violins and cellos. Carved from raw wood as mandolins are, the depths and sides are sculpted in a bloc. The table of harmony is pierced with two f shaped openings and is overhanged by a floating bridge, holding the strings of the guitar. Sometimes, electromagnetic microphones are added to the body. If the Archtop guitar became a legend in neo-classical guitar craft, she’s also well know in her electric forms. We think of course of the Gibson Les Paul, her direct offspring, but also to the ES model.

What is the difference with a more standard guitar ?

A guitar is made of a body. This one is usualy filled, or ” solid ” for modern guitars, such as de RG series made by the Ibanez brand. They also can be semi, or hollow body. Equiped with a more prominent part of electronic, the biggest difference between a normal guitar and an Archtop is the visual aspect and it’s componants. Alike an electric guitar, the Archtop can be equiped with a microphone. Everything is possible but he will usualy be alone and well hidden ! On the contrary with the electric guitare, having many mics straight on top of the body. The sound, for instance, will have a smoother color. Perfect for the Jazz ! You can play metal on it, but the warmth of the melody will make you realise it’s unfit.

A sound beloved by jazz amaters

Very soon, Archtop guitars seduced the great Jazz guitarists of the 40’s and 50’s thanks to their impressive sonic range. With them, guitarist could finally take parts to small acoustic orchestra of the past. Better even, young talents like Django Reinhardt or Wes Montgomery found a way to push further te limits of the instrument through incredible solos. What defined the genra nowadays. The sound of an Archtop Guitar is still very special today, and few folk guitarist would dare try this particular craft.

When using an archtop guitar ?

Its body, curvier than usual makes the instrument quite imposing. Its strings are in steel and deal a great tension to let out an intense and loud sound that many don’t find adapted for rock and blues. There where many laying style might seem anecdotical on an electric guitare, theu might totally change the sound of an archtop guitar. The latest more inclined to be affeted by the material used to vibrate the strings. Like a pick. Or according to the position where you pick the strings.

To grasp the idea of the tender and warm sound of archtop guitars, here is a video : 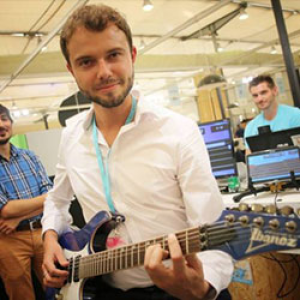